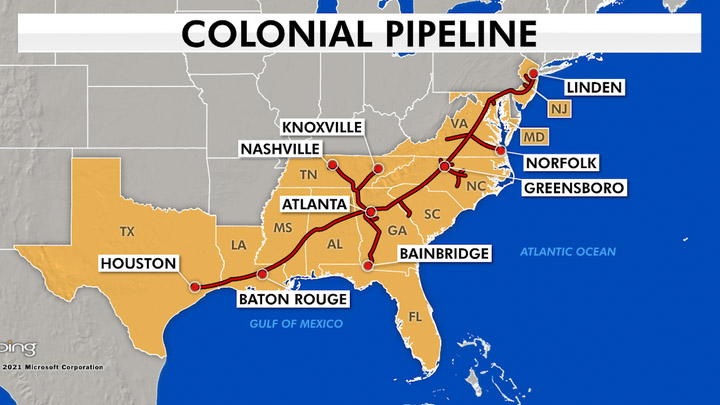 Colonial Pipeline, operator of a pipeline stretching 5,500 miles, was forced to shut down after a ransomware attack in early May. In a disturbing example of the vulnerability of the United States’ energy infrastructure, 45 percent of the East Coast’s fuel supplies were suddenly halted in an effort to contain the assault.

Since the early 1960s, the vital pipeline has provided gasoline and jet fuel to customers across the East Coast. About 2.5 million barrels of gasoline, diesel fuel, and jet fuel are transferred each day through the pipeline. The hack showcases the vulnerability of the aging infrastructure which is connected to the internet.

Ransomware attacks have soared recently, shutting down the District of Columbia police department, hospitals treating COVID-19 patients, and nearly crippling water treatment plants. Cybersecurity experts expect a rise in ransomware or hacker-backed virtual attacks since they can implement automation and utilize cryptocurrency, making it harder to target the perpetrators.

The Federal Bureau of Investigation (FBI), Energy Department, and the White House were immediately briefed on the hacking details. Corporate computers were targeted by ransomware, which means that criminals hold data until the victim turns over a payment. The FBI focused its attention on the hacking group DarkSide, who they hold responsible for the ransomware incident. Colonial Pipeline ended up paying the hackers roughly 75 bitcoin ($5 million) to get the gas flowing again.

Coincidentally, DarkSide reported they are shutting down due to “pressure” from the United States. According to the New York Times, “A statement written in Russian and provided to The New York Times on Friday [May 14] by the cybersecurity firm Intel 471, DarkSide said it had lost access to the public-facing portion of its online system, including its blog and payment server, as well as funds that it said had been withdrawn to an unknown account. It said the group’s main web page and other public-facing resources would go offline within 48 hours.”

Cybersecurity experts warned the statement could be a hoax, allowing the members to deflect negative attention. If they did, in fact, shut down, the threat from ransomware is not over. These hacker groups often disband, regroup, and rebrand themselves in an effort to thwart law enforcement.

Ransomware isn’t just for big companies – hackers can target you, too.

Contact the virus experts at CPS today if you suspect your computer has been compromised.